102 Followers
See all past shows and fair booths

Eun-ju Kim, who has been persistently working with a single material called a pencil for a long time, always exposes energy and life beyond the image itself on the canvas. Although the contrast between black and white can give a monotony in her work, the black color of the pencil is scattered and reflected by light, creating a variety of work. In other words, the honest workforce that repeatedly moved pencils to create the texture caused by the friction between paper and graphite is revealed through the image. The unique feature of Eun-ju Kim is that she creates classical materials such as the human body, waves, and flowers in Eastern and Western art history in a way that no one has ever done with a very common material such as a pencil. The artist's screen is heavy and full of black, but paradoxically, light is important. Old ancestors said that the ink contains thousands of colors. Thousands and tens of thousands of lines drawn honestly as if silently brushing the sword are piled up, constantly changing color and shape, like ink, depending on the brightness and angle of light. The constantly changing colors and shapes are the wind, sea, and light of Busan that the artist has seen since childhood. Eun-ju Kim's work has a Korean character, especially “Busan,” so the process of work is slow and hard, but it shines even when compared to the work of any other artist in the world. 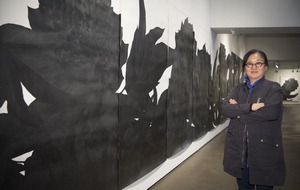