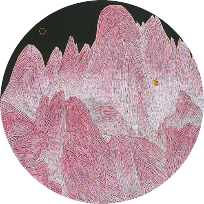 Junho Lee, who has been working on self-portraits with brushes like other artists, has been working in his own unique way since the early 2000s. In order to understand the world of Lee Jun-ho's work, attention should be paid to the background process. What captivates his work at first glance is the dark and vivid color that seems excessive, he repeats the manual work of stacking thick acrylic paints on several layers. Afterwards, instead of using a brush, the thick layers of paint are carefully scraped one by one like a tap, creating an image as if carving the momentum of the rock and the shape of the peak. In the late Joseon Dynasty, Gyeomjae Jeongseon expressed the rocks and trees in the area of ​​Geumgangsan with his unique vertical and horizontal Gyeomjaejoon. The lines and textures that appear as scratches on the screen are weathered by rain and wind for a long time and look like cracked and split rocks, and they look like sedimentary layers. It goes well with black and brings out a fantastic atmosphere.
See all past shows and fair booths